My neighbor Susan had an old auntie who made these. Visits to Auntie's house, and her pickles, were a cherished memory from childhood. Once she was grown up, she didn't like pickles much; all those in the store and at home were made with vinegar, and cooked. She thought that the magically good pickles at Auntie's must have been exaggerated by her memory. One day, staying with a friend, she tasted a long-brined fermented kosher dill. All the remembered deliciousness was there, and it was like being a kid again.

Even for those of us with no memories to recall, these are extraordinary. They make you realize why people bothered going to the trouble to invent pickles in the first place. At any rate, they are the only kind that I can get excited about eating. A restorative snack in summer heat, full of probiotics and electrolytes, they are a go-to appetizer for us in hot weather, and a wonderful way to keep summer going into Fall.

Here are Susan's directions, just as she gave them to me:

"BRINE for 2 gallon stone crock, or deep stainless steel pot)
14 cups water + 3/4 c. Pickling salt. The recipe calls for boiling all the water, but I’ve never done that. I boil about a quart and dissolve the salt in it. If you didn’t make enough, you can do a half batch extra and cool down with ice cubes.

CUCUMBERS:  Best are small (up to 4-5 “) pickling cukes, picked that day. (Beit Alphas work well when young.) Scrub under cold water with brush and remove any remnants of flowers. If you have to cut into a pickle to remove a bad spot, best to just eat that one. Soak the scrubbed cucumbers in ice water.

GARLIC: One head, separated in cloves. Remove the skins, and cut away the end. Pour boiling water over to sterilize; garlic is susceptible to mold spores.

GRAPE LEAVES (or cherry) — pick fresh and wash or pour boiling water over in a colander. You will want enough to line the bottom of the crock and then layer between cucumbers, garlic, and dill.
[If you can't get these, a pinch of alum is a possible substitute to keep the pickles crisp.]
​
DILL WEED: Ideal is the flowering heads of dill, with the seeds forming but still green, not dried out. If that is not available you can use some fresh dill weed and some seeds but the flavor will be slightly different and IMHO not as good. Rinse with hot water in colander.

DIRECTIONS:
Place grape leaves on the bottom of the crock or pot and layer the cucumbers, dill and garlic cloves. Top with grape leaves. Pour brine over to fully cover. Use the weighted stones from the fermentation crock, or else put a ceramic plate over the cukes in a pot to keep them under the brine. Use some cans, like tuna, that are heavy but flat enough to allow you to put the lid on the pot. Or you can tie a clean towel over the top. Put in a cool place out of the sunlight. After.a few days, check to see if there is any mold forming and using a strainer remove it. At the beginning this is normal. It should clear up once fermentation starts if you remove most of it regularly for a few days. Check after two weeks, but it usually takes three or four to come to complete fermentation. You can keep the pickles in the brine in the fridge, or pack in sterile jars with brine that has been strained through cheesecloth, and process in a water bath, but they will not remain as crunchy and will taste a little different."
​ 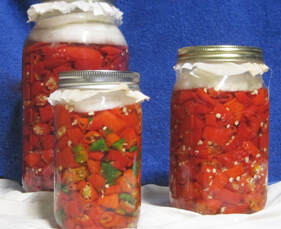 Hot sauce can be as simple as whirring up a few peppers in the blender, but the best Louisiana hot sauce involves live fermentation, just like pickles. If you've never done fermentation before, hot sauce is a good first project. As always with hot peppers, use gloves, don't touch your eyes or any sensitive skin, and scrub well afterward.

What peppers to use? Hotter than you would sit down and eat. I like Serrano, Criolla Sella or Korean peppers. They are spicy but not lethal, and don't increase in heat after the initial burn. Jalapenos vary wildly in heat, so taste before choosing. Joe's Long Cayenne, is luscious, both hot and sweet. A mixture is fine.

You'll need: These are optional:
Prepare the peppers:
Rinse and drain your peppers. Using gloves and kitchen shears, chop them into a bowl, discarding the stems. If you like a fruitier hot sauce, you can split and deseed the peppers before cutting them in pieces. (I discard the seeds I can get easily, and leave the rest.) The Korean peppers in the photo are in rings 1/2" to 3/4" thick.

Now pack the pepper pieces into you clean crock or jars, along with the garlic. You want them to be tightly packed. Leave room for the weight, but not a lot of extra room. Finish off each jar with peppers that are not chopped but instead opened out flat and deseeded. These will help hold down the smaller pieces to keep them from scooting up past the weight. You could also use half an onion for this final layer, as in the photo. Smash down the peppers, try to spread your top layer so little pieces can't get past it, and put the weights on. Believe me, you don't want to try to put the weight on after the contents are floating in brine! Add the whey or pickle juice if using.

For the brine:
To make a quart (4 cups) of brine, whisk 3 tablespoons of salt into a quart of water. This is enough to do 2 quart jars of peppers. When the salt is fully dissolved (the brine is clear, and there are no crystals lying on the bottom), pour it slowly into the jars. When the brine covers the contents completely, rap on the jar to dislodge bubbles. Add more brine if needed. Set in a spot that is out of the way but where you will remember to check it daily. Put on a loose lid, or cover with a cloth. (In the photo you can see the jar rings holding cloth in place.) That way, bubbles can escape but the jar is protected from insects.

Fermentation
Depending on how warm the room is, fermentation should start in 1-3 days. You will start to see bubbles. Check every other day for white scum and skim it off if any appears. It is a normal part of the process and no cause for alarm. (Save any extra brine to top up.)  I would recommend fermenting for 2-3 weeks. When the brine is cloudy, the peppers have softened, and the jar has a nice slightly sour smell, you can stop fermentation and bottle. (Professionals go 4-6 weeks until the mixture is so sour that fermention stops. I don't.)

Blending and Bottling
If you have multiple jars of peppers, you don't have to bottle them all at once. I still have some jars of fermented peppers in brine in the fridge, useful for adding to salsas and salads. They keep very well in their jars, in the fridge, like pickles.

To make the sauce, drain most of the brine off of the peppers into a bowl or cup. Don't throw it away! Put the peppers into the blender or food processor, and add just enough brine so that you can blend it up. (A hand food mill or a tomato-sauce machine would make a nice seedless product if available.) When the sauce is as smooth as you like it, it is ready to use. Thin with the brine to your favorite consistency. Refrigerated, it will keep for a year.

To Make a Table Sauce:
To make a hot sauce to keep on the table, (unrefrigerated) you need to add more salt and some vinegar. I generally do this with the clear liquid that separates out after the blended hot sauce sits for awhile. For every cup of the thin sauce, add a 1/4 teasp of salt and 2 Tblsp vinegar.

That's it. One more blow for self-sufficiency.