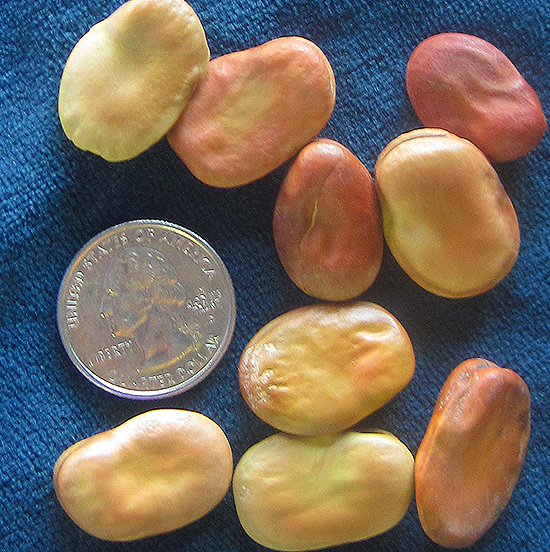 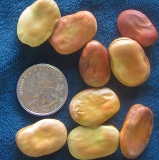 Food and soil-building crop, sown in fall and harvested in spring in zones 7-10. Sown very early spring in colder zones.

These are a delicious and traditional spring treat, tasting much like peas. The beans are huge--that is a quarter in the photo, not a nickel. They can be shelled out when still green, like edamame. In France and Italy, there are parties and festivals where piles of the green favas are shelled and eaten raw when they first appear. Favas are also a popular dry bean, both in England and around the Mediterranean. Hummus and falafel are often made from dried favas. The beautiful black-and-white blossoms draw beneficials and feed bees very early in spring, or late winter, when nectar is scarce. Nitrogen-fixer, enriches the soil. Usually grows to about 4'. Packet contains 38 very large seeds, and weighs about 2 ounces.

Many people don't know that you can also snap off the tender top growth as a vegetable in it's own right, like pea shoots. Some gardeners do this late in the bloom cycle, when the plant has already formed pods up the stem. Cutting off the top inch or two of top growth causes the existing pods to ripen faster, and can prevent the very tender juicy tops from drawing aphids. This does prevent further bean formation, however.

Note:There is a very rare, but potentially serious, genetic allergy to favas, called favism. If you have never had them before, start with a small portion, and have them cooked, not raw.

Sold out
Add to Cart