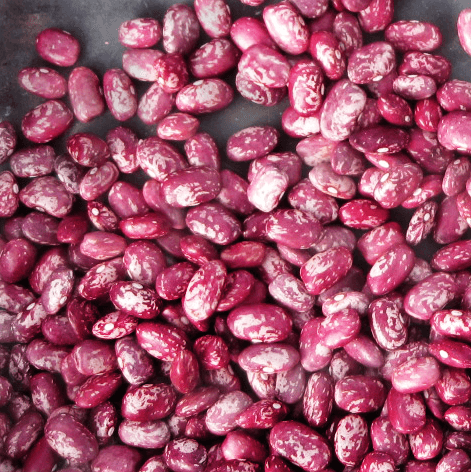 A beautiful short-season bean from Peru. Matures in 90 days, even in our region, with night temperatures in the 50's all summer. Several years ago, Golden Rule Garden was gifted with several bean varieties from the Urubamba Valley in Peru. (the "sacred valley of the Incas.") Unfortunately, most of them could not mature beans at our latitude. One, however, was a beautiful bean white-and-magenta bean with semi-bush habit that was able to mature some seed. By growing the bean over several years, selecting for earliness and bush habit, Ellen Bartholomew was able to produce a bean with the flavor, appearance, and vigor of the Peruvian parents, but with the ability to produce a crop reliably in North America on thrifty fully-bush plants. Named for the Peruvian woman who gifted Ellen with the original seeds. 60 seeds