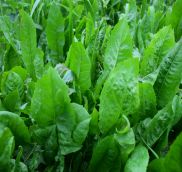 Forage chicory is a strain of wild chicory that has been selected for perennial habit and high nutrition in pastures. According to the University of Ohio, it " is a perennial forb that produces large, upright leaves during spring, summer, and early fall. It has a deep taproot and heat tolerance allowing for continued growth during the summer months." They also note that it's extremely nutritious.

Like its relative dandelion, chicory is bitter (both have been used since ancient times as liver tonics and detoxifiers.) and may need soaking or parboiling after the leaves are mature. In Italy, it is common practice to harvest wild chicory and soak it in cold water before cooking. Older leaves with more bitterness are often blanched in boiling water, then thrown into a pan with olive oil or meat juices for final cooking.

To maintain production of leaves, you can cut the flower stalks before they produce buds. These are edible as well. The root is a traditional substitute for, or addition to, coffee when roasted and ground.