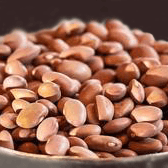 Delicious heirloom bean from central California. I searched for these for years, because I remembered their great flavor. When I finally found and grew them, I was delighted to find they are a standout in the garden as well--early and trouble-free. I was laid up this year until July (I was in a car wreck.) But planted in mid-July, these still gave me a crop of beautiful, creamy, pink beans before frost. I'd have had a bigger crop if I'd planted earlier--it was a near thing. But still. The other bush dry beans I was trialing didn't make it.

King City Pinks are different than the famous Santa Maria pinks. Santa Marias have a strong beefy flavor. These King City beans are very mild and sweet, with a creamy texture--even though they hold their shape when cooked. Honestly, I don't know of a better bean for salad, with just olive oil, garlic, and lemon. All the tasters agreed that these make delicious broth, so they are great in soup or as a simple pot bean even without a lot of additions like meat and spices. John Steinbeck mentioned them in his novels about life in the Monterrey area, and they were a staple in local stores and restaurants until recently. I'm so happy to steward this piece of California history.