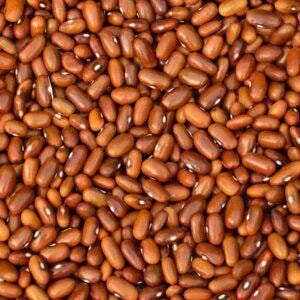 One of Carol Deppe's newest varieties, this bean gives big yields of flavorful savory meaty beans with all the hardiness and resilience that Carol's varieties are known for. Here is her full description: "Early productive dry bean with a rich meaty flavor. (Replaces OSSI-Pledged variety Beef-Bush Brown Resilient, which is discontinued.) I bred Brown Resilient from Gaucho, an Argentine heirloom, and Beefy Resilient Grex, a gene pool I developed from a cross of Gaucho and Black Mitla. Brown Resilient is genetically about ¾ Gaucho and ¼ Black Mitla. Brown Resilient is about one to two weeks later than Gaucho and early New England standards such as Jacobs Cattle and Soldier. In the maritime Northwest, Brown Resilient yields about as well as Jacobs Cattle or Soldier but is a full-flavored rather than a mild-flavored bean. So it serves well in dishes where the bean must stand alone and provide most or all the flavor such as in vegan dishes that will not also include meat or cheese. Also complements the flavors of beef, pork, tomatoes, and cheese. Not optimal in Boston Baked beans or in vegetable, chicken, or turkey soups, where it would overwhelm the other ingredients. Capable of producing well in the maritime NW, where springs can be cold and nights drop down to the 50’s Fahrenheit through most of the summer. The variety is a mix of bushes and short-vine types. Vines on the short vine types don’t touch the ground, and plants can be grown as bushes. The seeds are about 80 – 90% brown, with the rest being gold or black. I initially started selecting a pure brown line under the name Beef-Bush Brown Resilient, but found out that the short-vined types yielded much better than the bushes in the same space and could be treated just like bushes. And the short-vine plants may be more resistant to drought. In addition, brown lines with a little yellow and black left in turned out to yield much higher than pure brown lines. So I dropped Beef-Bush Brown Resilient, and replaced it with the higher yielding Brown Resilient. If I were intending to get a PVP or patent on my varieties I would have to make a uniform bush brown version with all brown beans that was wimpier and lower yielding than Brown Resilient. But I’m not and I don’t. Ha ha ha! Brown Resilient is a sister variety to Beefy Resilient Grex and Beef-Bush Black Resilient. Bred by Carol Deppe." OSSI-pledged open-source variety. 40 seeds

Add to Cart
The Open Source Seed Initiative exists so that breeders who originate new varieties can protect them from exploitation and patenting by corporations. It means that the breeder has freely given up her patent rights in order to keep the variety in the public domain forever. The OSSI pledge reads: "You have the freedom to use these OSSI-pledged seeds in any way you choose. In return, you pledge not to restrict others' use of these seeds or their derivatives, by patents or other means, and to include this pledge in any transfer of these seeds or their derivatives."