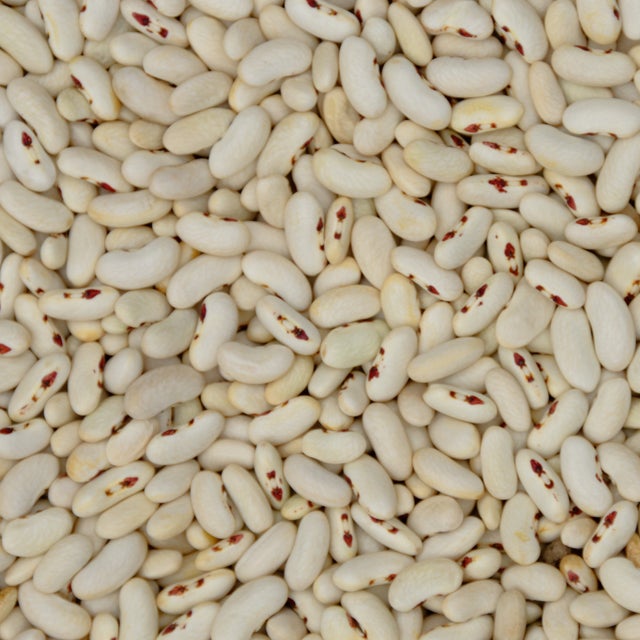 I love white beans, and had been trying to choose one to add to our offerings when Carol Deppe told me she would have this for us. What a treat--not only a white bean, but a new Carol Deppe bean with all big yield, hardiness, and adaptability she is known for. Here is her description in full: "One day about one bean plant’s worth of white seeds turned up in 20 lbs of Gaucho. The seeds were the same size and shape as Gaucho, but were white with a candle pattern on the hilum. When planted the white beans became plants that were identical to Gaucho plants except they had the white seeds. So there was clearly no accidental cross or contamination. The white seeds must have been caused by a recessive mutation that was present in the Gaucho bean population that had happened to become homozygous in one plant. What fun! Sometimes beans breed themselves and all you have to do is notice and cooperate. White Candle Gaucho has a mild flavor that works well in Boston Baked Beans and in vegetable, chicken, or turkey soups or stews. It has the same high yield and agronomic characteristics as Gaucho. White Candle Gaucho is a sister line to Gaucho. Bred by Carol Deppe, Fertile Valley Seeds. " 40 seeds

Add to Cart
The Open Source Seed Initiative exists so that breeders who originate new varieties can protect them from exploitation and patenting by corporations. It means that the breeder has freely given up her patent rights in order to keep the variety in the public domain forever. The OSSI pledge reads: "You have the freedom to use these OSSI-pledged seeds in any way you choose. In return, you pledge not to restrict others' use of these seeds or their derivatives, by patents or other means, and to include this pledge in any transfer of these seeds or their derivatives."