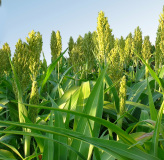 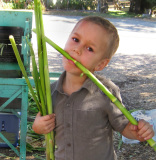 Drought-resistant and able to get by on much less fertility (and water) than its relative, corn. Sorghum is a great homestead crop, giving both gluten-free grain for flour, pilaf, polenta, and even beer. Plus a bonus of juice from the stalks that can be boiled down into syrup or used as a sweetener. Sorghum has traditionally been "the sugarcane of the north." Most varieties are bred for either grain or syrup, but a few like this are dual-purpose.

Ellen Bartholomew received two sorghum varieties from Africa (where sorghum is the staple grain.) One was tall and white' one was short and red. Neither was well-adapted to Northern California. By crossing the two and selecting for earlier maturity and sweeter flavor, she arrived at a staple crop that is dependable in our climate, where nighttime temperatures drop into the fifties even on very hot summer days.